Can you be an “Ethical Tourist”?

Descriptions of the Caribbean have long reduced the region to the luring trinity of sun, sea and sand in order to market it as the ideal holiday destination. The splendour of its rainforests and the aquatic hues of its coral reefs are undeniably beautiful.

But Caribbean islands are also home to people, animals and other non-human species whose complex histories have been shaped by exploitative tourism.

In the west, the idea of a “paradise lost”, as popularised by Milton’s famous epic poem telling the story of Adam and Eve, gave rise to a hunt for “undiscovered” Edens still present on Earth.

When Christopher Columbus arrived in the New World, the appeal of an earthly paradise was at its zenith in Europe. Setting out with the intention of reaching East Asia to establish more effective intercontinental trade routes – as well as to spread Catholicism – Columbus seemed to be taking his cue from the Bible, whose Book of Genesis describes the garden of paradise as being planted “eastward in Eden”.

But when Columbus first set foot on what was in fact a Caribbean beach, the natural landscape presented another, secular prize: the promise of infinite riches from the natural world.

Sure enough, the increasing hype in the West around the search for paradise became less about pleasing God and more about greed for travellers like Columbus, as evidenced by colonisers’ exploitation of indigenous people and extraction of wealth from natural and biological resources.

The seductive modern image of paradise, with its golden sands and crystal waters, evolved as part of a neo-colonial project of tourism, as the flow of foreign power was being reimagined in the wake of the collapse of European empires.

From travel brochures to television advertisements, the tourism industry presents the unethical idea that paradise can be bought just like any other commodity.

The myth of paradise has turned the Caribbean region into a space open to invasion by the highest bidder. Westerners are encouraged to escape from the monotony of everyday life to be serviced at the hands of labourers – a dangerous echo of life on the plantation for enslaved African people.

Poetry as protest and resistance

Many contemporary Caribbean writers discuss some of the Caribbean’s most urgent environmental and social concerns, including exploitative tourism, dwindling local land rights and underpaid citizen labour.

Jamaica Kincaid, Michele Cliff and others have likened tourism to a renewed version of colonialism. For me, the most striking writing on the Caribbean environment comes from the St. Lucian poet Derek Walcott.

Walcott, in his poem “Midsummer XXVII”, describes how nature in Trinidad has been “replaced or modified” by the “grey, metal light” of technology. Under the joint influences of colonialism and extractive capitalism affecting the islands, the Caribbean sea starts to seem like “sheets of zinc” and the sun like “steady acetylene”.

The dominance of tourist-oriented, rather than local-oriented, businesses is also suggested in Walcott’s poem “The Star Apple Kingdom”, which describes the “ulcers” of “hotels”, “casinos”, “brothels”, and the “empires of tobacco, sugar and bananas”.

In his Nobel prize lecture, Walcott condemns tourist brochures for reducing the enormous diversity of the Caribbean environment to blandly appealing beach vistas out of “the shame of necessity”, mourning the islands’ “future of polluted marinas”.

My research into environmental racism and the damaging myth of Caribbean paradise has also been inspired by the work of the Bahamian-born poet Marion Bethel. She writes about how colonial violence led to the brutal demise of the Caribbean environment through forest clearance, soil erosion and reef destruction.

In her poem “On a Coral Cay”, Bethel protests how in the Bahamas “the whale done dead … we no longer whale or wreck”. She also considers how the effects of the colonial past have catalysed new forms of environmental degradation in the present day. “Tourism”, she writes, “is king / divine and banking, a silver prince”, and this “tourist plantation” and “banking estate” has made the natives “waiters” who “service the world”.

Be an ethical tourist

Listening to Caribbean voices should prompt us to practice more ethical travel as tourists. Visiting the Caribbean for a holiday is not in itself immoral, but Bethel, Walcott and other Caribbean writers have condemned unethical tourism practices.

Despite the economic importance of tourism in the Caribbean, the local environment and particularly marine life continues to suffer as a consequence of unsustainable activities catering to demanding tourists.

Income from tourists is rarely distributed evenly: so support native businesses by shopping locally instead of at popular, often foreign-owned chains. Be respectful of native customs and traditions. Do more than dwell in the luxury of your hotel or on the beach: immerse yourself in Caribbean culture by visiting museums and historical sites. Opt for eco-friendly transportation. Don’t litter. Take photos of the land and the animals with caution and respect, and make sure the local people give their permission before they end up on your Instagram feed.

This article is republished from The Conversation under a Creative Commons license. Read the original article.

« Flights from UK to Saint Lucia

Why we need to… 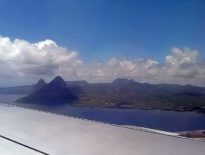