Driving on the relatively quiet roads between Choiseul and Vieux Fort is arguably just about the most soothing thing one can do in St Lucia. That south-west quarter of the island abounds with vistas and roadside sightings that suggest zipping through the French Riviera, wild and free. But here, you have the twin Pitons around every corner as you go along the gently winding roads that dip in and out of the undulating coastal hills. So sooner or later, you find yourself feeling extremely pleased at being immersed in the rusticity with tropical Caribbeana parading past you on either side. “Well, this is charming,” is something that will occur to you again and again. 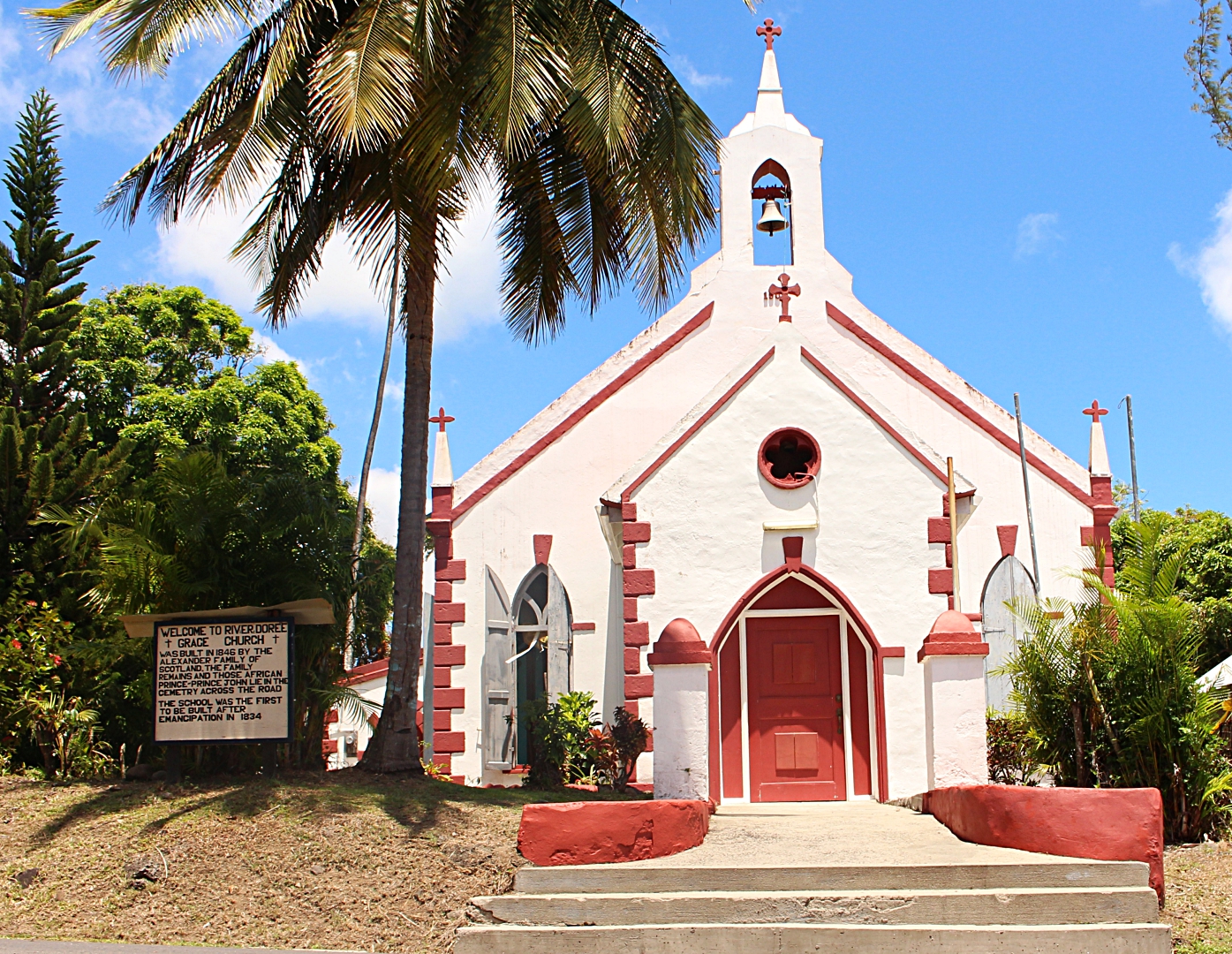 And one of the most charming things you will come across is the Anglican Church in the community of River Doree, a community that is roughly about twenty-minutes from either Soufriere or Vieux Fort by car. Keep your eyes open for this modest little gem in a modest little place. The church is tucked away at the end of a long straight portion of the south-west highway and is too easy to miss if you don’t know what to look for. Use the what3word address link in the ‘How to Get There’ section or try your hand at finding it by either a marvelous serendipity or an alert perspicacity. Whatever your choice of discovery method, keep your eyes peeled for the creamy walls, neatly lined and tipped with the most tasteful burgundy, surrounded by neat attractive gardens or you’ll suddenly realise it’s passing you by, and you will have to execute a quick stop! 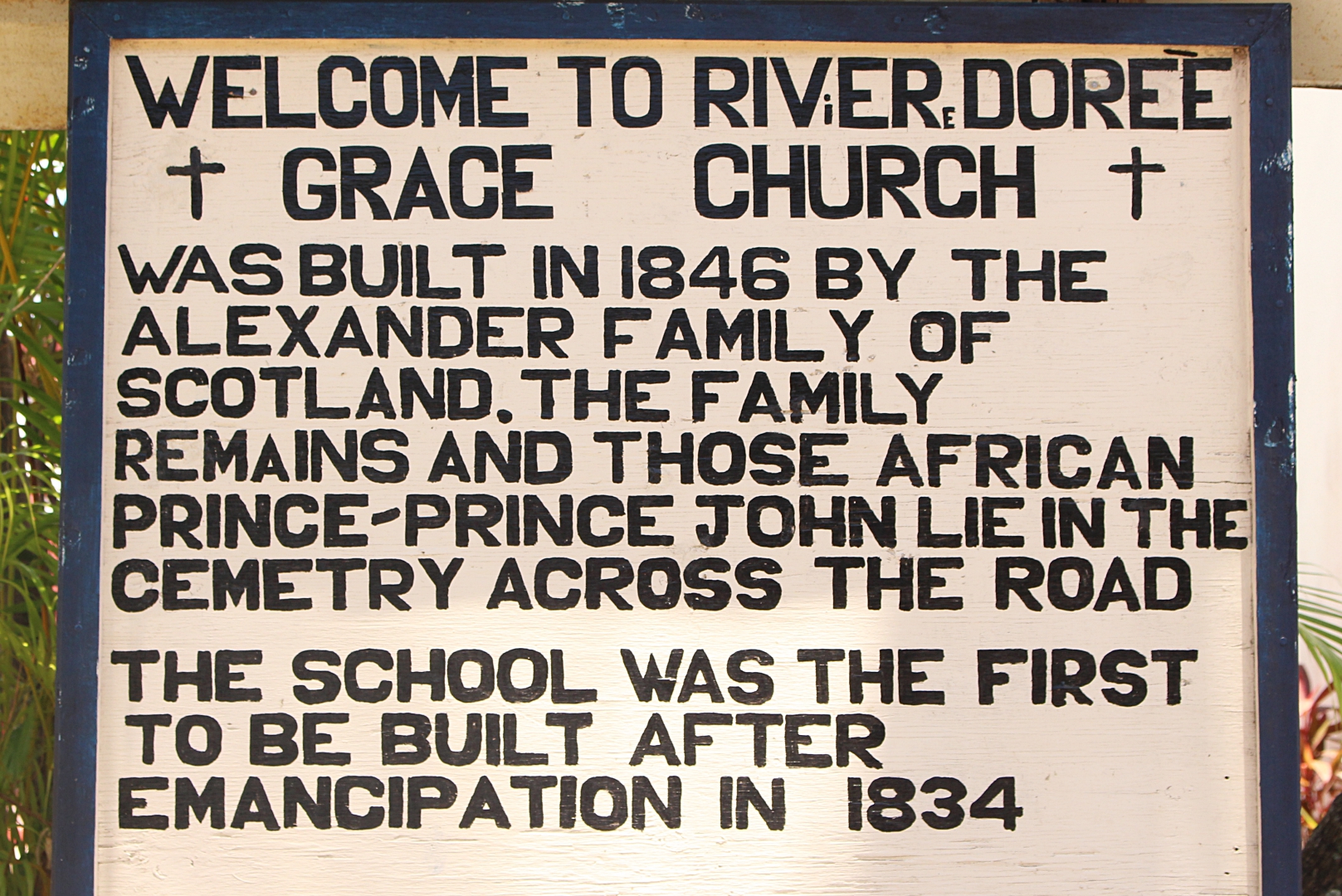 The sign, with its charming grammatical mistakes, tells you that it is called Grace Church, and then states its claim to fame

The Grace Church is one of a handful of Anglican churches in St Lucia. For although St Lucia was, for most of its history, a colony of England, England’s official religion, Anglicanism, never really took root in the wider island society. This wonderful, beautiful little church can be considered one of the great contributions to Saint Lucia by the Anglican Church. The Anglican Church also gifted Saint Lucia two holidays [Whit Monday and Thanksgiving]. You may or may not have such incidental considerations in mind as you decide to stop by, but the idea that unobtrusive minorities exist and can contribute such treasures to the nation as a whole, is quite moving.

And you shouldn’t be shy about looking around. The church is open every day and the resident Priest, Rev. Eleanor Glasgow, lives in the rectory right next to the church. Inside you’ll find stations of the cross and a dome mural painted by members of the St Omer family 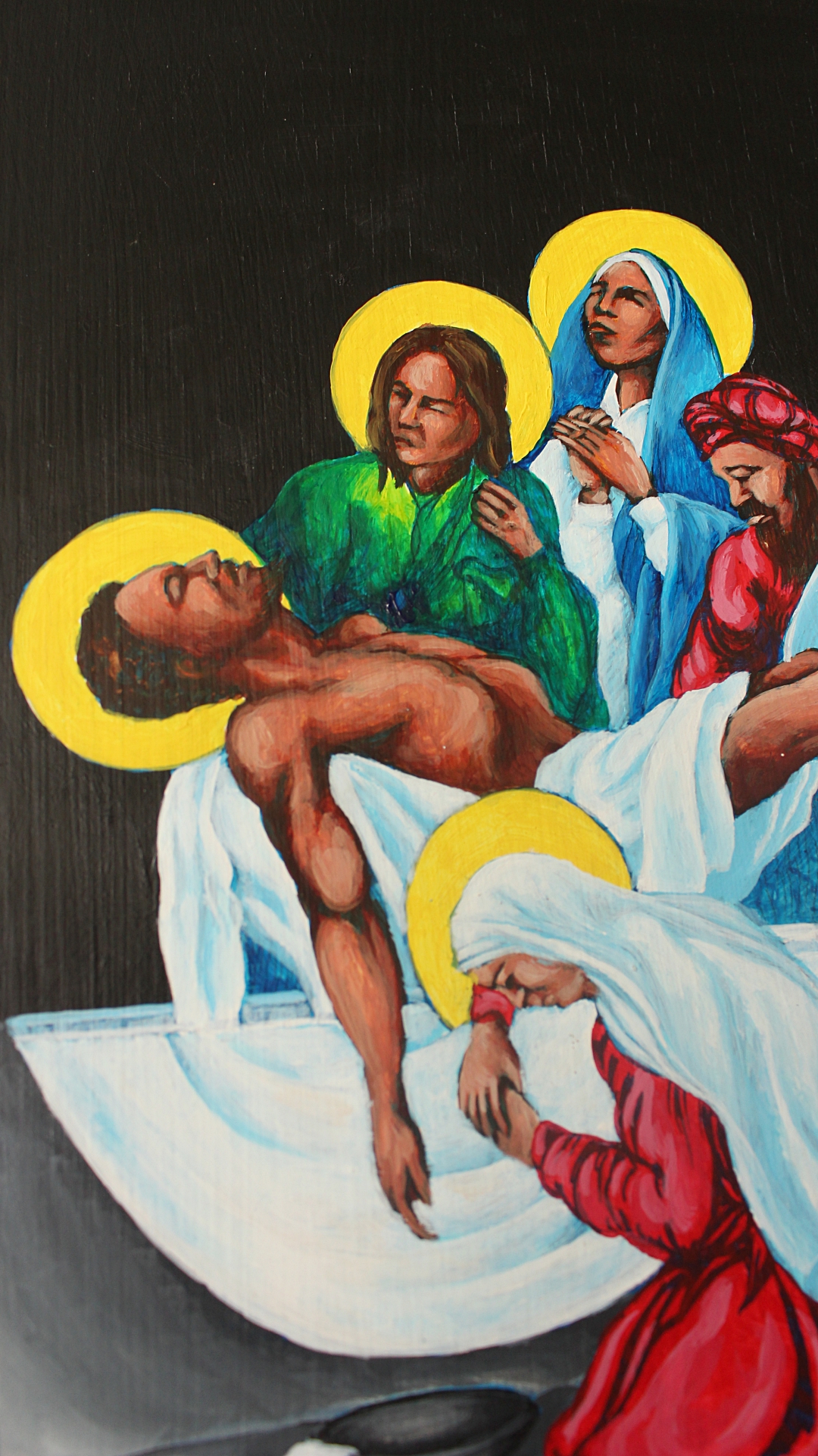 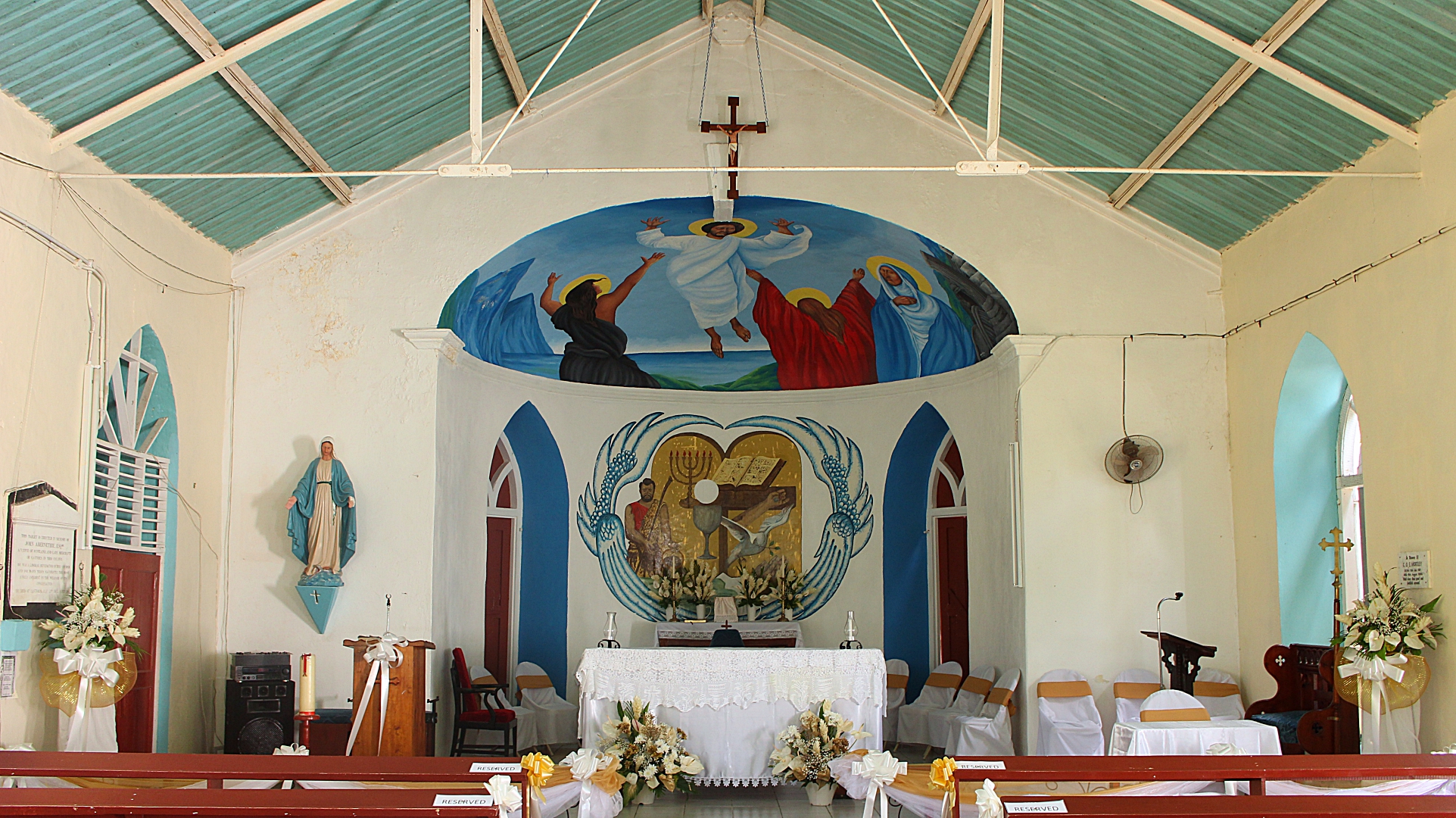 There is a school a little to the back of the church. This was the first school built in St Lucia, immediately after the Emancipation, and knowing this, compounds that feeling of being in a place where History has a significant presence. The Church is also one of the first churches built in Saint Lucia, and is significant because it was built in no small part, by the newly freed people freely giving their labour to erect this little house of worship. The grounds within which the church snugly rests are well-tended, and one feels that the foundational devotion of that congregation has remained undiminished over the century and a half since the little church was built.

And it is refreshing to be in a space that one knows has received so much personal care and devotion. You can’t help but get the “feel-good feels” as you imagine the audacious dedication from the three Scottish sisters who wrote letters by hand to ask for funding to build it, and those who volunteered to dig out and carry and break rocks with bare hands to build it, and the thousands of hands over the last hundred and sixty years, that have swept it, painted it, repaired it, adorned it. To make a brief, ten-to-fifteen stop here and soak in such grandly humble provenance is precisely the type of thing that can make any journey, no matter how mundane, feel like a blessed adventure.

Check it out. “A serious house on serious earth,” as the English writer Philip Larkin would have said.

Also you can buy A History of Saint Lucia by Jolien Harmsen, Guy Ellis and Robert Devaux on Amazon or purchase at The Reef, Sandy Beach, Vieux Fort

How to get there

Click on this What3Words address to be taken straight to the exact spot on the map:

Download the What3Words app to be able to accurately pinpoint places – to within 3 metres. Android & iOS Use with your favourite app to get driving directions

From Soufriere, drive south past Choiseul (the road will not go into Choiseul but instead, take you on the bendiest by-pass road you can imagine…just two bends really, but impressive nonetheless..and try not to be distracted if you see the nearly perfect profile of Mt. Soufriere in neighbouring St. Vincent).

Keep driving past the Police Station, an ancient falling-down wooden building on the left, Cemetary as you go over the bridge, and on up to La Fargue, where you’ll see the Wellness Centre and the Choiseul Art & Craft Centre and Choiseul Secondary School…keep going…keep going…and soon you’ll be there near the end of a long straight road. There are now a couple of speedbumps to help you slow down and not drive past.

From Vieux Fort or Laborie, drive north, pass Piaye and then onto a stretch of straight road where you’ll see Balenbouche Estate on your left, round two big bends and you’ll see it on your right. 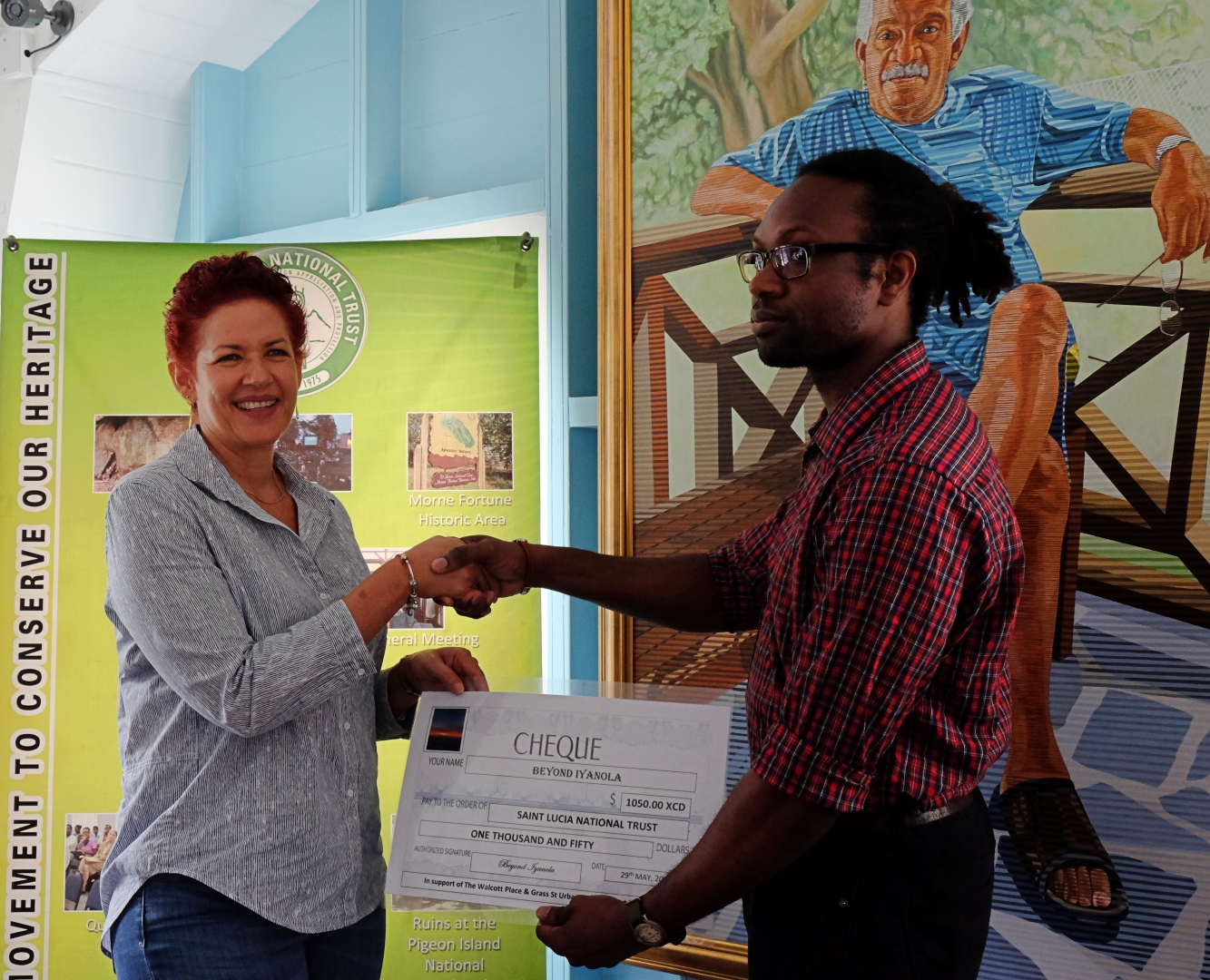 Give Back - Voluntourism Beyond Iyanola – the UK Diaspora Gives Back