We’ve put together a self-guided tour of Saint Lucia’s public sculptures and commemorative statues. Most of these are in the City of Castries so, with the exception of two, they’re an easy walk. Use our interactive map to go on your self-guided tour.

As with any city, please take all normal precautions for the safety of your valuables and enjoy the hustle and bustle of the city safely as you explore.

See a full-screen map of this walk here

We’re really sorry, but we can’t get our maps to show up in our posts right now…please use the above link to see our map

Park at the NIC Car Park and you’ll be ready for the first stop, set in the roundabout adjacent to the Castries Central Market and picturesque Castries Waterfront. “All In” by sculptor Jallim Eudovic is Saint Lucia’s newest public sculpture. Unveiled on 3rd October 2019, to commemorate the 40th Anniversary of Saint Lucia’s Independence, this is an allegoric sculpture that ‘tells the story’ of our ancestors. We adapted Jallim’s description of his work:

The piece speaks to Saint Lucia’s roots. The Kalinago, first settlers, depended on fishing to survive and traded with neighbouring islands. The enslaved Africans inherited the Kalinago fishing traditions and fishing has remained a part of Saint Lucian culture to this day.
The piece symbolizes collectivity and cooperation. The vessel’s progress requires collective energies; a unified approach. Everyone puts his energy into the movement and when it moves, everyone moves.

The gaze is towards the land, towards the mountains where the family awaits anxiously. It was all a matter of survival and out there in the perilous waters, everyone had to be “all in”.

Walk between the NIC Car Park and the Castries Market, heading inland along JnBaptiste St., and at the end of the road you will find the George V Park beyond the rows of public mini-buses.

Here we have a French General in a British Park. George V, for whom the Park is named, was King of the United Kingdom and the British Dominions, and Emperor of India, from 6 May 1910 until his death in 1936, but we don’t have his statue here. Instead we have Charles Eugène Gabriel de La Croix de Castries, Marquis de Castries. This statue was moved from it’s original place in Constitution Park when the statue of Sir John George Melvin Compton, Saint Lucia’s first Prime Minister was erected in 2015.

The Marquis de Castries was born 25 February 1727 in Paris and died 11 January 1801. He was a French Marshal who became the Secretary of State of the Navy on 13 October 1780. Saint Lucia’s port Carenage underwent a change of name to Castries.

Visit Castries City Hall to see the portrait of the Marquis


Set to the side of the Marquis de Castries you will find the Croix de Lorraine (Cross of Lorraine). This monument will be of special interest to anyone interested in World War II memorabilia.

In France, the Cross of Lorraine, the ancestral emblem of René II, Duke of Lorraine became the answer to the Nazi swastika and was the symbol of Free France during World War II.
During WWII, Saint Lucia was a strong supporter and haven for the French Resistance operating in Martinique. Every year in November as part of Remembrance Day Celebrations, the French Ambassador with French Military, usually the Navy, lay wreaths at Croix de Lorraine

Now you can return to Jean Baptiste Street, turn left as you exit George V Park, and walk to Jeremie St, turn right and then left into Peynier St. You will find Place Bideau on your right. Place Bideau. On 24th July, 1983 this green space in the City of Castries was named Place Bideau, where two bronze statues one of Bideau and the other of Bolívar were unveiled commemorating the historical link that ties Saint Lucia’s French history to that of Venezuela.

Born 24 July 1783 and died 17 December 1830, he is generally known as Simón Bolívar or colloquially as El Libertador, the Liberator. Bolivar was a Venezuelan military and political leader who led the secession of what we know as Venezuela, Bolivia, Colombia, Ecuador, Peru, and Panama from the Spanish Empire. (Wikipedia)
His relationship with Saint Lucia is explained in the story of Bideau.

Jean Baptiste Bideau, businessman, sea captain, governor, colonel, freedom fighter and diplomat. Also called Juan Bautista Bideau, he was a French mulatto born in Saint Lucia on 8th December, 1780 in Desruisseaux, a community in the District of Micoud in the south of Saint Lucia; a community that still exists today.

On 14 July, 1816, Simón Bolívar was stranded on the Ocumare de la Costa, with enemy forces closing in on his position. If caught by the Spanish he would surely be executed.  If caught, history would tell a different story to the one we know today.  One man could not – would not let this happen to his comrade in arms. Jean Baptiste Bideau climbed into a caone and rescued Bolivar, and the rest, as we say, is history.

8th December, 1980 was the centenary of Bideau’s birth and 7th April, 2017 was the two hundredth anniversary of his death.

More information may be found in “The Story of Jean Baptiste Bideau” available at most online book stores.

Continuing along Peynier St, you’ll see the Castries City Hall on your left. There are colourful photos of our national symbols along the front wall and you can see the portrait of the Marquis de Castries inside. Opposite is Constitution Park which is Saint Lucia’s version of Hyde Park Corner. Here you’ll find gatherings, especially of elder men, discussing politics, life, news and any other subject that has caught their interest! Constitution Park is also the home to Ricky George’s statue commemorating Saint Lucia’s first Prime Minister, Rt. Honourable Sir John George Melvin Compton.

The Right Honourable Sir John George Melvin Compton was born in Canouan, St. Vincent and the Grenadines on April 29, 1925. He was the only child of Ethel Compton and came to Saint Lucia as a very young child. He grew up in Micoud where his family estate remains. He was a committed farmer, so much so, that his body was transported to his funeral in his old farm vehicle.

More information may be found in “Profile: Order of Saint Lucia – The Saint Lucia Cross” available at most online book stores.

From Constitution Park, we suggest you walk down Laborie Street to the Derek Walcott Square. Here you will find twin busts of Saint Lucia’s two Nobel Laureates.

The Honourable Sir William Arthur Lewis was born in Castries on 23rd January 1915, the fourth son (of five), of George Ferdinand and Ida Louisa Lewis. In 1979 he received the Nobel Prize for Economics, the very year of Saint Lucia’s Independence for his development economics theories.

Sir Arthur is buried near the Inniskilling Monument, on the grounds of the Community College named for him. In 2017, the island’s second Nobel Laureate Sir Derek Walcott was laid to rest alongside him. SALCC as the college is called, also hosts a statue of the great man the reception area.

The Honourable Sir Derek Alton Walcott was born in Castries on 23rd January 1930, one of a pair of twins, to Alix and Warwick Walcott, his twin brother being Roderick Alden. In 1992 Derek received the Nobel Prize for Literature, making Saint Lucia No.1 for the most Nobel Laureates per capita.The following year, Columbus Square was renamed Derek Walcott Square in his honour.

More information on both men may be found in “Profiles: Nobel Laureates of Saint Lucia”  available at most online book stores.

From here, you will turn left and left again out of the main gate to the park and head down to Bridge St via Micoud Street, Turning right on Bridge St, cross over at the pedestrian crossing and head for the big glass building at the end of the street. This is ECFH and Bank of Saint Lucia. On the raised forecourt, you’ll find what was Saint Lucia’s first public art sculpture.

The Aftermath by Ricky George is a free standing monumental life size bronze sculpture of a man and a a woman in a joyous embrace. It is located at the entrance of the Bank of Saint Lucia Headquarters and was commissioned in 1997 by the Bank, from sculptor Ricky George.
As the artist explains the piece: “The Aftermath” explores the coexistence of man and woman.

The Honourable Sir George Frederick Lawrence Charles was born in Castries on 7 June 1916. He was the son of James Charles, political activist, and attended St. Mary’s College.

Sir George Charles was a trade unionist, politician and alongside his father, a founder of the Saint Lucia Labour Party. In 1960 George Charles was the first Chief Minister of Saint Lucia, as well as the island’s first Minister for Education and Social Affairs. Vigie Airport was renamed George FL Charles Airport on 4 August 1997

Road Trip – one last monument in the historic town of Soufriere

On August 5th 2019, the long awaited reopening of the Soufriere Town Square finally took place. In pride of place was Ricky George’s evocative Freedom Monument, commissioned by the Government of St. Lucia, quite some time before and left to languish in a store room, many wondered if this striking work would ever see the light of day!

The work was originally commissioned as a monument to commemorate the historical liberation movements on the island. It now can finally fulfill that function.

We didn’t include this on our map, but you can’t miss it if you visit Soufriere, the Square is between Bridge Street and the Catholic Church.

Other self-guided tours and related features you may like

Our author A. L. Dawn French has written many books on famous Saint Lucians, as well as Saint Lucians who shood be famous! Most of the information in this self-guided tour comes from her books – so please do patronise the author and purchase her books.
Dawn also write a children’s series “Peanut Tales” and an adult series “Sabine” – click above and take a look 🙂 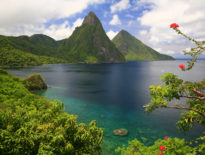 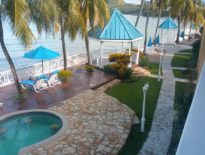